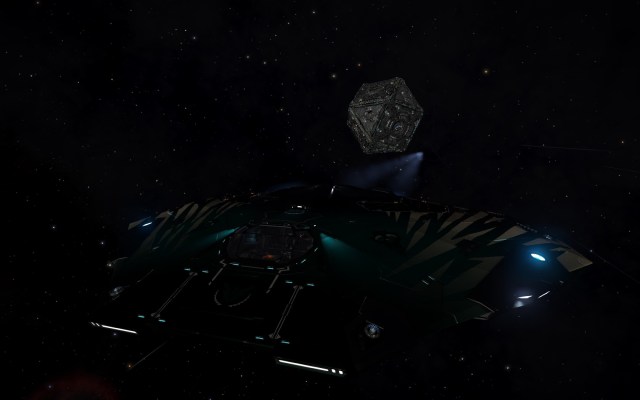 The famous Coco, before I shelled out for the purple paint job.

I have begun a new blog, separate to this one, titled Black Odyssey. This is a metafiction project, taking the events that occur while I play the science fiction computer game Elite Dangerous and weaving them into a fictional narrative.

The inspiration for this blog was seeded when I upgraded my starting ship, the tiny Sidewinder, to the much larger and more capable Cobra Mk III. I looked around the cockpit one day, and noticed an empty copilot chair, beside where my own character was sitting. What would happen if someone could sit there? I asked myself, and the whole scenario began to grow.

It is the story of an eager young journalist named Joseph who heads out to the edge of populated space to write an article about miners being preyed upon by pirates, and bemoaning the lack of governing authority to keep them safe. Instead, he meets a foul-mouthed, slightly erratic bounty hunter, trader, and occasional smuggler named Black Marisse. She offers to let him ride along on her travels, while she explores beyond the fringes of civilisation, gets in fights with pirates, and occasionally ships a little cargo around when the mood strikes her.

While I have taken some liberties with the order of events and written in a lot of embellishment, the majority of what you read in the blog is what I am really getting up to in the game. My character in E:D is, indeed, Black Marisse, and she actually flies a purple Cobra that is affectionately nicknamed Coco. All images in the blog are screenshots from my own game.

I’m not sure where the story will go, as I am writing as I play, and the first two episodes have ended up significantly longer than I intended, owing to the need to set up a lot of the scenario and explain a lot of in-universe concepts, like how warp travel and fuel scooping work. Some of it is official Elite canon, but a lot of it is stuff I made up to dramatise the story. If I have any Elite lore wrong, please don’t kill me.

I hope you enjoy it. The story begins with the first chapter, appropriately titled Black Marisse

– DexX aka James J. Dominguez aka Jacob and Black Marisse