Just who is Rey, anyway? Here’s a thought… 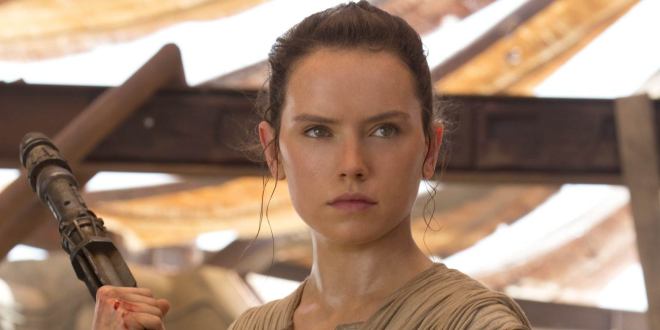 It will be at least two years before we find out about Rey’s origins, and possibly even longer.

If you have not seen the film and do not wish to have its plot spoiled for you, stop reading right now. Watch videos of cute ducklings instead.

The Force Awakens leaves a lot of unanswered questions, but the primary one is the origin of Rey. While it would be cool to have her turn out to be from a new Jedi bloodline, unrelated to the Skywalker clan (or indeed the Kenobis, as some fan theories have suggested) it would be cool and empowering (hey, maybe she’s good because she’s just that good!) but let’s be honest: this is Star Wars. This is melodrama with spaceships. There’s gotta be a twist, right?

Well, based on a whole lot of wild conjecture, but also a few interesting clues in the narrative, I have come up with a frankly ridiculous fan theory about where Rey came from and how she came to be stranded on Jakku. It’s pretty much baseless, and will almost certainly turn out to be untrue, but I like it.

This is going to be a long one. Are you ready to begin?

How? Imperfect cloning of damaged DNA.

Bear with me. This is where the road gets bumpy.

Let’s imagine we’re back at the end of the Battle of Endor. The Empire has lost Vader and Palpatine, its two most prominent and arguably most powerful Force-users. Master and apprentice are both gone in one fell swoop, and there is nobody to take their place.

In the aftermath of the Battle, Imperial forces infiltrate Endor’s forest moon, trying to piece together exactly how everything went wrong. They find a destroyed shield generator, a pile of dead Stormtroopers (or at least their armour and their picked-clean bones) and, inexplicably, the cold remains of a funeral pyre with a few scorched remnants of Darth Vader, Lord of the Sith.

We know that either Empire or First Order agents were there, because Kylo Ren has Vader’s melted helmet and breather mask. My theory is that this is not all they found: inside the helmet, they also found some salvageable DNA, damaged by the fire, but still potentially usable.

With Vader and Palpatine gone, and with human cloning a well-established technology, some bright spark has an idea: instead of recruiting a replacement for Vader, why don’t we make one?

As it turns out, the process is more difficult than they imagined. It is impossible to find a fully intact DNA strand because of the damage from the fire, so they have to piece together the entire sequence and fill in some blanks. The procedure suffers many setbacks and failures, and many failed clones are sent to the incinerator, but finally, after a decade or more of trying, they finally succeed.

The new clone is not an exact copy – the sex has been reversed for starters – but even as a newborn the Force blazes in her. The baby is raised to early childhood, learning to speak with the British-sounding accent of Coruscant and the other core systems. (Contrast her with Kylo Ren, who was raised by his parents amid other people of the Outer Rim, and speaks with an American-sounding accent as a result. This is not a coincidence: both Finn and Rey are played by British actors, but only one was allowed to speak with her natural accent. This is not an arbitrary choice; it is a clue.)

Just as the young clone grows old enough to begin her Sith training, disaster strikes (from a certain point of view): someone on the other side of the conflict – Rebel, Republic, or Resistance – learns of this top secret genetics project and stages a mission to end it. The plan is simple enough: destroy the lab and all of the genetic material it contains, including any clones.

However, when the invader – possibly even Luke Skywalker himself – meets an innocent little girl, still too young to have been touched by the Dark Side, they take pity on her. They destroy the lab, kill all of the staff, and make it appear that everything and everyone within it have been lost.

Meanwhile, Luke Skywalker finds himself with a new Padawan. She is very young, too young to begin Jedi training in earnest, but old enough to be taught basic meditation. She is taught how to calm her thoughts, find her centre, and to feel The Force moving through her. Luke is disturbed by how powerful she is, and can feel his father’s presence within her, so he is reluctant to advance her training any further. He also never gives her a full name: she remains simply Rey.

What Luke fails to notice was that Rey, bored and lonely, has begun training herself. With nobody willing to train her directly, Rey begins watching her classmates, observing their manipulation of The Force. It turns out that she has a knack for imitation, and can replicate Force-powered feats that she watches others perform. Luke learns of this ability, and it does nothing to ease his worry about what to do with her. Even so, he can’t help seeing her as a second chance to redeem his father, to turn him from the Dark Side before he can turn to it in the first place.

All of this is brought to a sudden, bloody conclusion when Kylo Ren’s seduction by the Dark Side comes to a head and he slaughters all of Luke’s Jedi pupils. Why is Rey spared? Perhaps Luke is too afraid of her potential, of what might become of Vader reborn, and so has not revealed her presence to anybody. Perhaps Kylo Ren feels something in her, a subconscious sense of Vader’s presence, that stays his hand, even as he slaughters her classmates.

However it happens, Rey is the sole survivor of the massacre, and Luke is left with a single student, one whom he is too afraid to train into full realisation of her powers. His Jedi school is in ruins, he has lost all but one of his students, and, worst of all, the entire tragedy has been carried out by his own nephew, the son of his sister and his best friend. Luke needs to get away for a while, maybe to try to track down Kylo Ren, or maybe just run away and be alone, devastated by the magnitude of his failure.

But what to do with Rey? He uses The Force to place a blockage in her memory. She is still extremely young, so it’s easy to place a blanket over much of her childhood. It doesn’t need to stay in place for long, he thinks – he’ll be back soon enough. Mirroring his own childhood, left in his aunt and uncle’s care on Tatooine, he leaves her on Jakku in the care of a scrap merchant, but also leaves a friend to watch over her. Much like how Obi Wan Kenobi remained on Tatooine to keep tabs on young Luke, Lor San Tekka stayed close to Rey, but never too close. Just in case something bad happens (like, say, Rey going full Dark Side and needing to be put down) Lor San Tekka is given a map to Luke’s location.

(Lor San Tekka is a bit of a riddle. He is a nobody, a completely new character that has come out of nowhere and been presented to the audience as if we should recognise him. My theory is that he was supposed to be Wedge Antilles, and he was included in the hope that Denis Lawson would agree to reprise his role. Lawson has confirmed that he was asked to be in it, but turned it down because it would have “bored” him. I suspect Max Von Sydow’s part was hastily written in as an unsatisfying substitute.)

Here is where The Force Awakens begins. Rey is a lonely junk collector on a floating dustbowl, unusually clever and resourceful for her age, and extremely skilled at taking care of herself. Her “family” has not returned for her (and note that it is always “family” – she never specifies a mother, a father, a sister, an aunt, or anyone else specific, just the nebulous “family”, almost as if she’s repeating a meaningless term that was implanted into her memory).

Encountering the lightsabre in Maz Kanata’s cellar is the event that pokes the smallest hole in the dam that holds back her memories. It is not a coincidence that this is Luke’s original lightsabre, the blue one that was apparently lost along with Luke’s hand on Bespin. The last lightsabre we saw Luke wielding was the green one that he built himself. Had the film wanted us to link Rey with Luke, then this would have been a more sensible choice: after all, a Jedi’s handmade lightsabre is a personal thing, tied in deeply to their use of The Force.

However, the blue lightsabre has a much deeper meaning: before it was Luke’s, it belonged to his father, Anakin Skywalker, aka Darth Vader. The lightsabre isn’t calling to Rey because it belongs to Luke. It belongs to her. Clone or not, she embodies the living essence of Darth Vader, and Vader’s personal weapon calls to her.

When Kylo Ren attempts to burrow into her mind, the cap on her memories is cracked, but not entirely broken. Seemingly by instinct she pushes away her fear and anger, tapping into her forgotten childhood training to calm herself, find her centre, and tap into The Force. She not only manages to push him out of her head, but she mimics his mind-reading ability, unconsciously copying his use of The Force, pushing further, inside his mind, reading his thoughts.

The dam is still standing at this point, but it is riddled with cracks and it’s leaking water quickly. Rey uses the Jedi mind trick to force her guard to set her free (once again finding her calm centre in order to tap into The Force) and then gets most of the way out of one of the most secure sites in the galaxy. She probably doesn’t even realise that she’s using The Force to feel the approach of guards or to find escape routes; as far as she’s concerned, it’s just blind instinct.

Finally, she faces Kylo Ren one on one, blade to blade. At first, she has no idea what she’s doing, and simply uses the lightsabre as if it’s the quarterstaff she’s been fighting with for most of her life. Slowly, though, just like in her childhood, she mimics Kylo Ren’s use of The Force. As the fight progresses, while he loses blood and gets weaker and weaker, Rey finds her calm centre and opens herself up to The Force, becoming more powerful, more precise, and more dangerous.

If this theory is correct (and I’m not delusional enough to really believe that it is, despite how much I like it) then Rey will slowly break down the last of the mental barrier in Episode VIII. My hope is that she, along with a disillusioned Luke and grieving Leia, decides that both the Jedi and the Sith are extreme ideologies, and that her way is to walk a path between the Dark and the Light. Rey will walk a middle path, embracing the entirety of The Force instead of carving it up arbitrarily into the good bit and the bad bit.

The beauty of this is that Rey – a reborn Vader, and a second shot at redemption for Anakin Skywalker – would finally fulfill the Jedi prophecy from The Phantom Menace: she will bring balance to The Force.